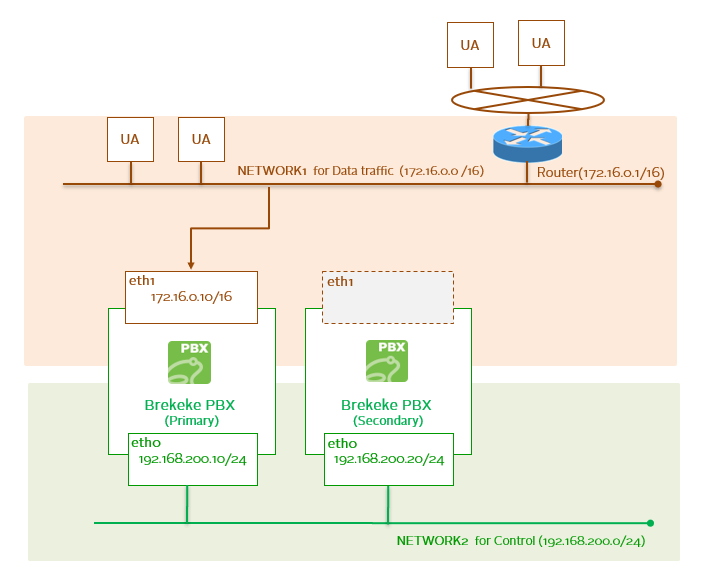 – On version 3.9.1.0, we made the biggest improvement on the redundancy function since the introduction of this function. We strongly recommend updating the software version  3.9.1.0 or later.

– If OS is Debian or Ubuntu, install arping command with “apt-get install iputils-arping”. (Refer to “OS commands for redundancy“)

Both servers need to have license with the same license configuration (user, option) and redundancy option enabled.

2. Make sure to have system clock on the same time on both Brekeke servers.

3. The configuration settings need to be set the same at the beginning.

The configuration settings at Brekeke PBX (i.e., user settings, ARS rules, network interface addresses at bundled SIP server, dial plans user authentication settings, etc.) To save time, you can backup settings of the primary server and restore it on the secondary server.

4. Two IP addresses are required at the primary server.

Below is a sample network setup:

Configure a firewall to accept ICMP packets sent from the secondary server when there is a firewall on the primary server.

6. Set port forwarding at router which Brekeke PBX are behind. Then, forward the SIP and RTP ports to the SERVICE IP ADDRESS.

7. The accounts under the bundled SIP server > [Aliases] will not be mirrored on the secondary server.

If authentication for REGISTER and INVITE is set to ON, set the same realm name at both primary and secondary bundled SIP Server admintool  > [configuration] > [SIP] > [Authentication] > [Realm(ex. domain name)]

9. Connect from UA to Brekeke PBX.

Was this helpful? Yes No
« IBM Watson Text to Speech1. Set up Brekeke PBX Auto Sync »