Detailed explanations and examples of Redundancy, Mirroring and Heartbeat functions can be found at Section 4.11 and Section 10 of Brekeke SIP Server Administrator Guide. 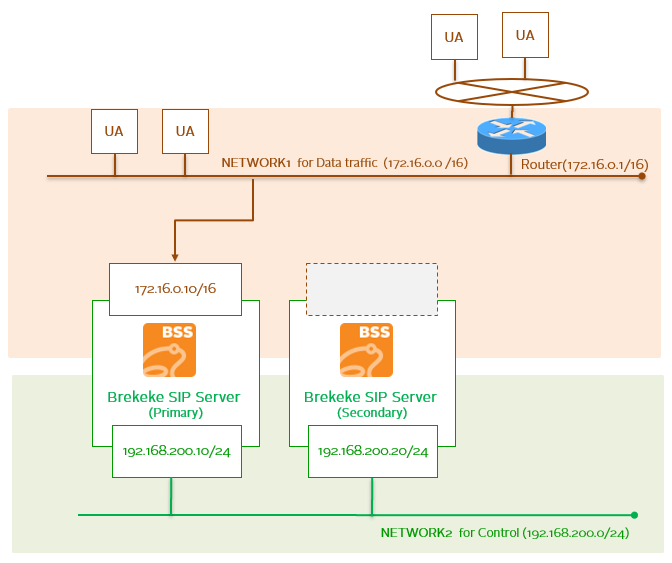 – We made significant upgrade on the Redundancy function. We hightly recommend updating the version of Brekeke SIP Server to v3.9.1.0 or later.
– Root privilege is required when the redundancy function is used.
– We recommend the following OS when using Linux server: Red Hat, CentOS and Fedora
– If OS is Debian or Ubuntu, install arping command with “apt-get install iputils-arping”. (Refer to “OS commands for redundancy“)

1. Prepare two servers and install the Advanced Edition of Brekeke SIP Server on each server. One is set as the primary server, and the other is as the secondary server.

Initial OS network settings in each server before setting up redundancy function:

*If the service IP is not set at OS setting, Brekeke SIP Server tries to attach Service IP once mirroring function is used.

3. For reduancy function to work correctly, both servers (Primary and Secondary) need to have the same configuration settings.

Examples of the initial settings:

For faster/easier option, instead of the setting primary/secondary separately, create a backup file at the primary server and restore it at the secondary server.

Other settings to confirm before setting up redundancy:

Was this helpful? Yes No
« SRTP Conversion1. Set Up Brekeke SIP Server Mirroring »